The Calon Cross for the William Fletcher of Carbery was assigned me, and at the time of the assignment, I didn’t know William. But as I am apt to do, I procrastinated, and did not even open the email before I went with Dorcas to the Heraldshill event. Friday night, we arrived about 10pm, and I met William, as he tried to ply us with wine. During the conversation, we heard about how William often would make bread for feast, for many different events.

I also realized that night that I had actually had a hand in William’s Boga Fyrd scroll, from Lilies 2007. TRM wanted to make an archery fyrdman, but had no spare preprints. I took the Iren Fyrd preprint, and modified the text to speak to an archer instead.

Fast forward to Sunday afternoon, when I finally checked my email, and discovered that there was a need for a text, as well as the illumination and calligraphy. Happy chance! Now I knew the recipient personally! I did further confidential research on him, and learned more details about his way of service.

The 14th C Luttrell Psalter is one of the best sources for archery images – showing both crossbows and longbows, stringing and target shooting. I selected the ones I thought best, and chose example borders to layout my text. 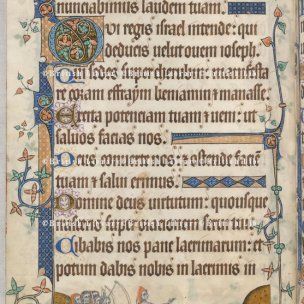 Research into the medieval Irish poetry forms, however, quickly overwhelmed me, and I wondered if I had bitten off too much. But I discovered that the Dan Direach was likely the best option. I knew my work would be called “oglachas” or apprentice work, as I can’t fit in all the alliteration and internal rhyming that a master could. I’m using a 4 line stanza with 3-7-7-7 syllables, and a rhyme pattern of AABA. In addition, I’m rhyming the B with the previous stanza’s A. His RM Logan contributed the stanza granting land.

On Lily field
Young ones many taught to wield
Yew with grey goose, ash and iron
Four years toil he will not yield

Masters yeast
Grain to loaf shall make a feast
Welcome gives travel’rs at night
Wine lends all, great and least

Read in court
on the tenth of September
A.S. Fifty-One the year
Twenty-Sixteen commonly

I got final approval for the text 8pm Thursday night, before the planned event (because of my delays). For the first time ever, I recorded how long each step took. As always, the initial plan was modified somewhat.

I also got a low-cost frame, and printed out the text and mini-documentation to slip in the back. With an outdoor event, I wanted to be sure the artwork made it home safely, and the recipient could read the words.

I use for layout is worth mentioning. While marking lines with ink or silverpoint certainly are period, I prefer not to have visible lines. When I first started doing scrolls, I did my layout in pencil. But sometimes in trying to erase the lines later, I ended up smudging the ink. The rounded end of this makes a dent in the paper, but not so much as to interfere with your writing. It is not very visible when viewed straight on, but can be seen and used as a guide by dipping your head and looking at the paper at an angle. It also makes great even dots. The set has different sized heads, for different sized dots.